Glimpse of the past

By Russ Gifford
(Originally published in The Weekender, 05/27/04)

As the ice recedes from the Missouri river each spring, Clint Pinkelman takes to his boat. He likes to scour the sandbars and the banks, looking for some of the older, interesting things that the river occasionally gives up when it is low. 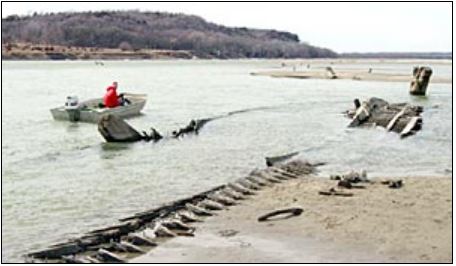 "I look for buffalo bones and skulls, things like that," said the 24 year old native of Hartington, Neb.  But one evening, as darkness began to gather, he found something much more intriguing. "I was letting the boat drift back down the river, and I saw all this wood on a sandbar. First I thought it might be someone's boat dock that had washed away, or an old bridge, maybe. But it was too big."

Pinkelman's discovery stretched over 100 feet long, and would take him back more than 100 years into history.  The river had uncovered the remains of a steamboat - and uncovered a piece of Sioux City's history.

A treacherous highway
The rivers were the highways of the 1800s. On the upper reaches of the Missouri were the forts and trading posts where furs and other goods were collected from trappers and natives. Steamboats, called "mountain boats" then in honor of their destination, wound their way up river with goods, supplies and a few passengers. The trip back brought valuable furs from the trappers. Later, the river was the path to the gold fields of the Montana Territory, and for passengers heading farther west, it was a connection to the stage for Virginia City.

But the Missouri was a treacherous highway, and the season of high water during the spring was short. High water is a relative phrase, as well. The river was high enough for these huge ships to pass, but not without effort. They spent much of their time negotiating the sandbars, and using winches, and poles set on the shore to "grasshopper" themselves off the low spots where they ran aground.

More dangerous, of course, were the sawyers - stumps hidden under the water, waiting to hole these ships crowded with up to 300 tons of goods. Over 400 ships were lost during the steamboat era, many of those near Kansas City, in the days when St. Louis provided the jumping off point for steamboats.

But as the railroad reached Sioux City, the Northwest Transportation Company made this young town the new northernmost port for mountain-bound steamboats. Sioux City burst forward as a way to cut weeks and almost 1,000 miles of dangerous river off the trip.

How dangerous? Amateur historian Pete King says there is one place near Onawa, where the buried wrecks of six steamships lie "within a good major league single apart from each other." According to the maps created from steamboat expert Capt. H. M. Chittenden's report in 1897, there are 25 remaining wrecks between Omaha and Sioux City. (Over 100 years later, the superstructure of one became visible in Sioux City during low water in 2013, on the South Sioux side of the river. The river reclaimed it quickly.)

As one old source noted, "for more than a generation, people of the Northwest regarded Sioux City as the commercial emporium of the upper Midwest. In those bustling days, when mountain boats were putting in almost daily, Sioux City offered a dry dock, a railroad, and a daily newspaper." These were hallmarks of civilization on the frontier in 1869. 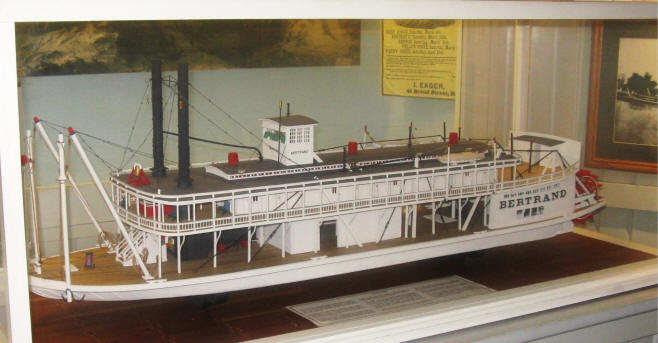 Sioux City historian Blair Chocoine was fascinated by the steamboat times of Sioux City, and studied them extensively, says Grace Linden of the Sioux City Museum. On display at the museum's Welcome Center on the St. Floyd Riverboat are many of his items, including maps and parts of boats that he had uncovered during his research.

Also on display are Chocoine's painstakingly created scale models of some of these boats. His work offers a real glimpse of what a "mountain boat" would have looked like if you were standing on the levee in Sioux City in the late 1870's.

The shipping season to the north lasted from about May 15 to late June, and again in the fall when the wild Missouri ran deep enough for boats to pass. According to an article written by Chicoine, as many as 10 steamboats might be tied up at the levee and docks below First Street, between Jones and Pearl. Smoke rising from their stacks would be thick, as the captains prodded workers and passengers to finish loading, hurrying to take to the river while the water ran deep.

Which boat is it?

So, of the many boats on the river, which one has Pinkelman found? According to King, "its not always easy to determine which boat it was."

By Chittenden's map, there are only a few likely candidates. The Leadora sank near Ponca - too far south. The Urilda sank with a large cargo in April 1869 - but that was near Elk Point - still too far south.  The Kate Sweeney, a 328-ton sidewheeler carrying soldiers and military supplies, seems to be a possibility. And of course, the one everyone would like it to be is the North Alabama, which gave the bend in the river near Vermillion its name. Lost on Oct. 27, 1870, there have been many efforts to find her - so far, with no luck.

The jury is still out, says Pinkelman. "The professors that I took there were still discussing it last I heard," he said recently. Still, whether it has a name or not, the thrill of discovery still creeps into his voice.

For now, however, the river has recovered her treasure. But for a brief time, we could see a glimpse of history, and wonder what other secrets the Muddy Mo still holds.

Chittenden's list of steamboat wrecks on the Missouri, K through N. Historians have agreed Pinkelman's wreck is likely the North Alabama, sunk October 27, 1870 - over 133 years before.

Back to Home Page